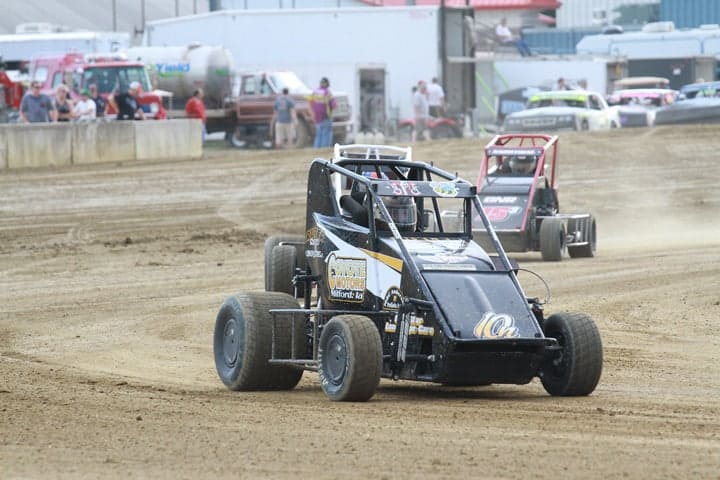 Racing is in the genes for the Birchard family. Red and his sons, Nick and Josh, have been around area racing for a long time.

The Birchard family has been involved racing Enduros or stock cars or helping on sprint cars or modifieds. In 2010, as Nick Birchard watched the World of Outlaws race during the Clay County Fair, the Miniakota Micro raced as the support class. He mentioned to his dad that they looked fun to race. When the Birchards found an inexpensive car, they bought it and started racing in 2012. Nick has since raced all over Iowa, southwest Minnesota, as well as different tracks in South Dakota, Wisconsin and Wyoming.

His brother, Josh, was a major player into getting a micro track built at the Clay County Fair Speedway.

“As we continued to race long distances from home, the Clay County Speedway was having weekly racing. We got a game plan together to see if we could make it work,” said Josh. “We’ve been having fun ever since.”

Nick quickly gives his family credit for their work, singing the praises of Josh and Red, who both work on the car as much as possible. Nights at the shop are family times, and even Nick and Josh’s grandpa stops in to make sure the guys are doing things right. The three generations also gather as much as possible to cheer on Nick as he races.

Nick says that the hardest part of racing is getting the car ready, taking the time of another full-time job, so the work Josh and their dad do on the car invaluable. The Micros go much faster than most people think. With a smaller track, “the Miniakota Micros are capable of running faster lap times than a lot of the other classes,” Nick said. “The cars are fun to drive and put on a fun show, especially when we race without the wings.

“Mentally, you have to have a short memory whether you win or lose. If you get your butt whooped, you don’t want to remember that. You have to move on and get better. And when you win, you have little time to celebrate because you have to get back working on the care because there is always someone out there working harder and putting in the hours to beat you.”