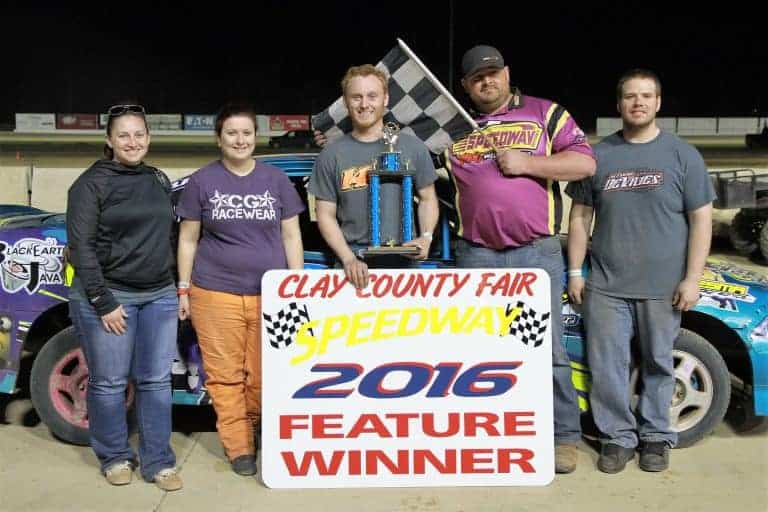 Jay DeVries always looks for his wife as he races around the track, usually so she won’t pass him or he won’t hit her car.

Jay has been racing since 2006, and four years into racing, he convinced his wife to hop in his brother’s car. From then on, Kaytee DeVries was hooked. She started racing regularly as soon as they got her a car in a few short weeks.

Since then, she’s raced against her husband every time they can be on the track together. This year they have been regular drivers at many tracks in Iowa and southwest Minnesota, racing every night except Sundays and Mondays. They prefer to race against each other. “We have fun racing against each other,” Kaytee said. “But if we get in the same wreck or if he hits me on the track, it makes for a long ride home.”

This year, the couple has raced 26 times already, working their way to beat last year’s 74 races. The DeVries team rarely race one car, but the person with more points will race if too many cars have been badly damaged.

Jay’s interest in racing started as a boy when he would join his dad Kelly at the racetrack, where he would race Enduro cars in Spencer and the surrounding area. Later, Jay would pick up a passion for Sport Compacts from his mom’s husband, Chad. Jay would join Chad at the track, helping friends with their Sport Compact car. Not too long after, the crew had a car ready for Jay and he was racing too.

Racing together has made the couple better drivers, and Jay currently leads Sport Compacts racing at the Clay County Fair Speedway with Kaytee only behind her first-place husband by two points, as of July 5. They are both competitive people, and she places better than him several times, he said. “Sports Compacts might be a beginner class, but there is so much competition and that’s what I like the most about it,” Kaytee said.

The couple works on their cars together as much as they can. They both like to watch each other succeed and have a chance to race together often. As much as they love being on the track together, it has its difficulties.

“She doesn’t like it when I bump her or push her on the track. She’ll get upset if I do that,” he said.

The Clay County Fair Speedway is Jay’s favorite track to race, as it was one of the earlier tracks to have Sports Compact racing. His favorite parts of racing include the adrenaline rush and the fans that come with the fun event, particularly the family and friends that can watch the DeVries racing team at the CCF Speedway.

“Overall, I’m just really happy to be on the track. I like that I can get my sponsors out there because they really help out a lot,” Jay said.